Waving Arms for No Reason

I learned group music at a young age.  I was taken to church and children's choir and learned about keeping time with the director and the basics of reading music.  By the time I started in the school band in fifth grade, I already knew that the director was marking the beats of each measure with the movements of his arms and that I needed to position my music stand so that I could see the music and the director in order to stay in time with the rest of the band.   I assumed my children who also went to church, children's choir, and elementary music had learned these things by the time they started band this year in sixth grade.  To my surprise, I discovered just last night that I was wrong!

Orangeboy and his sister are both visually impaired, but they are really quite adept at faking good vision.  I can understand when they fool others, but I always feel guilty and especially duped when I discover they have fooled me, their Mom.   Last night at dinner Orangeboy's sister was telling us that while she was over visiting her grandparents that "Pops" had shown her a video of him in his
pre-retirement days directing his middle school band at Festival.  She seemed amused when she recounted that "He was just standing up there in front of them waving his arms around."
I remarked in a mildly sarcastic tone, "Yes, that because he was the Director." (Like, duh, that's what the Director does.)

Sister Antagonist responded with, "Well, I didn't know what he was doing until he told me."

I was perplexed by her remark because she has been going to band rehearsal almost every school day for eight months now and learning to play the flute.  Orangeboy is also in the band learning trumpet. They have a band director.  How did she not know that her band teacher was up there waving her arms for a reason?   When I inquired further I discovered that Sister had no idea that her Band Director was up in front for the purpose of directing the band while they played.  She admitted that she couldn't really see what she was doing with her arms.  I then asked Orangeboy about it.
He said, "Well, I did actually know that Directors do that, but I can't really see what she's doing up there."

So there it was.   All these years when a music leader stood in front of any group they were in to lead singing and for the last eight months in band, my children did not know that they were being directed. They were making do on their own with less direction than the rest of the group and they were excelling! But it had to be more difficult, didn't it?  They had to discover their own cues for knowing when to start and how to stay together.  They had to work harder to know what everyone else was doing.

That's what Orangeboy is dealing with all the time.   No wonder he gets frustrated and angry.  No wonder he prefers to spend his time engaged in solitary activities.  When he misses a cue or can't interpret it, he has to find his own way of doing things and it is so much harder to keep up with the rest of us.

For years I've been trying to get inside his head and figure out what he's thinking and what he's missing - and I still get surprised. 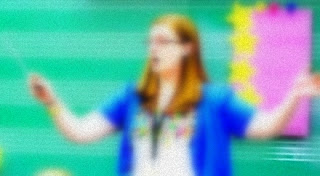