Today Orangeboy is enjoying the 11th anniversary of his birth!  He is now an official eleven year old.
In anticipation of this milestone event, Orangeboy stuffed a tiny piece of paper in his ear yesterday.  There was no apparent reason for it.  I asked him why he would do that, after I caught him digging in his ear and got him to admit what he had done.  His answer for why was, "I don't know".   So for no apparent reason, even to Orangeboy himself, he stuck a little piece of paper in his ear and then pushed in so far that he had a devilish time digging it out again.  His ear is still red today.    I'm guessing this was his final act of regression before becoming an almost grown boy of eleven.  (I would have helped him get it out safely, but I didn't know until too late.)

Often it seems that Orangeboy has this small, primitive portion of his brain that works against him and the rest of his intelligent, rational brain.   Maybe he really doesn't know why he would stuff paper in his ear.  I mean, what eleven, or ten, year old DOES THAT?   This is a boy who always makes A's in school and his teachers think he is funny and clever- even if a little socially isolated.   So what would he have been thinking that would make it seem like a clever idea to stuff something in his ear?
I'm guessing nothing.  It was not the thinking, reasoning part of his head that told him to do it.  It was that little primitive monkeybrain hidden under there that acts when emotions are high - when excitement is in the air - when grand events are being anticipated or participated in -
It is THIS rogue piece of grey matter that drives him to do these little acts of preschooler disgrace.  It is triggered by emotion and acts on imitation.

Imitation?  What do I mean?  Here's the story.  A couple of days before, Orangeboy's sister had a little earache after swimming.  I put a little home remedy ointment of olive oil and garlic in her ear.  And then, because I couldn't find a cotton ball, I put a fairly large wad of paper towel in her outer ear and told her that she should NOT push it in her ear any further and she should leave it for a couple of minutes and then take it out.   She did.   So then yesterday, the kids go to see Toy Story 3 with their cousin and uncle and on the ride back, Orangeboy shoves a tiny ball of paper down his ear canal.

He told me later that the trouble started when he was leaving the movie and then he put the paper in his ear.  MY suspicion is that when leaving the movie he was on a sugary concessions/post-3D movie high.  His ear may have been a bit sore from wearing the 3D glasses.  The rogue brain portion was going into high gear, what with the excitement coupled with a little bit of vague pain, and this piece of paper just presented itself to idle hands in the car.  Voila!  Monkeybrain strikes again!

OH Orangeboy!  Will you ever learn to control this rogue brain of yours?
Probably not completely.  The poor guy is MALE after all. 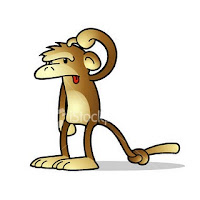 Happy Birthday!  And congratulations to Orangeboy for reaching that 50 pounds goal before his birthday!