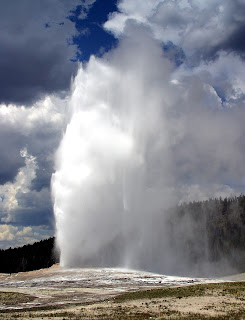 I know, posting two days in a row- it's very telling. I am home and find housework boring though abundant. So I'm writing a post even though I posted yesterday and my goal is only to average a post a week. My household co-star (husband) will probably resent this post because I am home with a sick child so I should be catching up on laundry, shining, scrubbing, mopping, and doing whatever a good mom and wifey does to make the house sparkle and smell good. But I'm "playing" on the computer.

I woke the gang of three this morning and Orangeboy got up slowly, got dressed in his bed as usual, and came downstairs for breakfast. He got a cup and some water and then said,
"By the way, I threw up last night... a couple of times."

Sigh! I'm thinking he did this in his bed and then stayed with it all night because this is his history; so I run up to his room to see the disaster. But there isn't any. I go down and ask,
"Are you sure? Where did you throw up?"
Meaning, of course, that I wanted to know where the mess was that I had to clean up. But in his typical fashion, he answered my exact question, rather than the implied question, by saying,
"Well, the first time in my hand and the second time in the bathtub."

Oh joy, now I think I'M going to be sick. So I run back up the stairs and look - yep! And go back down and tell Orangeboy that I am glad we have made some progress by getting him to go into the bathroom when he is sick, but next time please blow chunks in the toilet - it's much easier to get rid of that way.

He isn't always sporting a virus when he gets sick, so since he doesn't look sick and doesn't feel feverish, I assumed he was going to school. Then the water he had just drunk came up all over the place. He was totally taken by surprise - as usual - and had to go change his clothes while I mopped up that mess and his sister and brother totally grossed out and left the kitchen.

My co-star thought I should stay with him awhile and then take him to school a bit late if he seemed fine. So he stayed home with me and geysered a couple more times; after which he would exclaim,
"Not again!"
And I would be like, "Really? You had no idea that was about to happen?!" because it kept happening in new locations about the house. Then other stuff happened that I won't really go into - you know, involving both ends- and here we are at home for the day.

I guess it's more of this autism spectrum, sensory dysfunction stuff that causes him to geyser by surprise. He has no fever and doesn't act sick at all. I don't know.

One other thing I've noticed today that is sort of interesting: he is very calm and lucid. He is not dragging around or sleeping, he is doing stuff with his junior circuitry kit. He is not jabbering away mindlessly and he is not refusing to talk either. He has spoken to me several times and he has been very fluent. Often he has fluency issues. He's not hyper or stimming or anything. He seems like a completely normal, neurotypical nine year old today - except for his slightly odd pronunciation habit and a voice timber that sounds like it belongs to a younger child. Oh, and he still talks to me and then turns his face toward me for the obligatory "eye contact" but squints his eyes nearly shut while doing so.

I sort of wish he would be the geyser kid a bit more often; except for the geyser part and the laundry.

Email ThisBlogThis!Share to TwitterShare to FacebookShare to Pinterest
Labels: sensory